Why do I need VectorMagic?
I am an editor of a small free student driven physics magazine called, Gamma. When our illustrator hands in the front page picture is as a huge bitmap file which has artifacts from the scanning and illustrating process. Usually we vectorized this picture by using either the opensource program called http://www.inkscape.org/ or Adobe Illustrator if we can find anybody who got the money for a license. 🙁

VectorMagic
That’s why I am so extremely happy that I found vectormagic.stanford.edu which is a Standford University Artificial Intelligence Laboratory research project by James Diebel and Jacob Norda (I found it through digg.com). The interface is really clean and all that is needed is a flash enabled browser and bitmap picture. This process of vectorizing the picture was much easier and faster than I my normal workflow on inkscape.
Link: vectormagic.stanford.edu 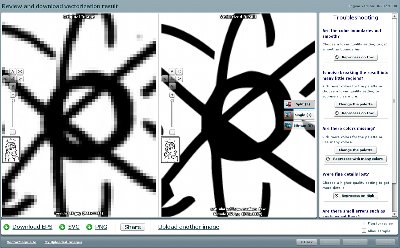 My input picture was the front page for the next issue of Gamma and I uploaded a 1280×1810 pixels 440Kb JPEG picture. About 5 minutes later I had the a vectorized version of the picture in eps format now only 66Kb big and so much more useful for printing.

What is vector graphics?
A bitmap picture stores information about the color of each pixel in the picture. If you have a 1280×1024 sized picture it will contain information on the color on each of the those 1310720 pixels. This can be done more or less intelligent, with compression or not, but the idea is the same for all bitmap pictures.

In vector graphics the idea of a pixel doesn’t really makes sense since the vector graphics doesn’t save information about the colors of the pixels but rather it contains objects as points, lines, curves, and polygons. Everything can represented by some amount of geometrical shapes even though for some shapes this will be awful lot of geometric shapes. If one consider the easy case of a straight line it is clear that one would need a very high resolution picture of that line if shouldn’t look choppy when printed on 10mX10m paper. But the information is really need to draw the line is really only the starting and ending point of the line which a very small piece of information when written as a vector.

So vector graphics is great for anything that seems reasonable to be build from points, lines, curves, and polygons. Drawings, Logos and such really benefits from being treated as vector graphics. In digital pictures the are often few straight lines and further more the noise in the picture is what gives the picture life, so if not a special effect is desired, there is no need to vectorized photographs. 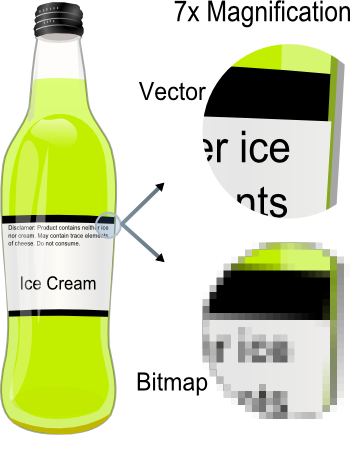