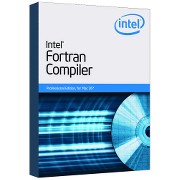 I had the problem that I need to use the Intel fortran compiler under Ubuntu Gutsy. This was a bit harder to setup than I initially expected, since Ubuntu 7.10 is not supported by Intel. After fiddling around for a while I found a way to make it work and I would like share the solution with anybody else that is interested so you wont need waste as much times as I.

Before the installation
First of all I need the installation files from Intel, so I went to the web page
http://www.intel.com/cd/software/products/asmo-na/eng/282048.htm
and chose the “Free Non-Commercial Download”. After registering I received an email with the a license file ending with .lic. I saved the license to /home/tjansson/ as I will need it later.

Some other packages are need to complete the installation of the compiler:

Installation
Since I could not get the default installation to work I ended up finding these pages which really helped me and my mini howto is based on those.
http://www.intel.com/support/performancetools/sb/CS-025939.htm
http://ubuntuforums.org/showthread.php?p=3621092

For some strange reason Ubuntu uses dash and not bash as the shell /bin/sh. This creates problems since dash does not have the same functions as bash which is needed by the Intel programs (and programs others too). So I remove the link from sh to dash and replace it with a link to bash instead.

After this I unpacked the tar ball I downloaded earlier and created a .deb file from the .rpm files included in the tar ball and install the .deb file.

of course this could be done with any editor but I think this is faster. Sorry for the bade code display – WordPress is messing with my style.

The final step was to add a line in the file /home/tjansson/.bashrc to make the shell inherit some intel variables:

Testing the installation
The final exercise is to test whether or not the compiler works. So I made a simple program and saved it as helloworld.f90

And finally it did 😀